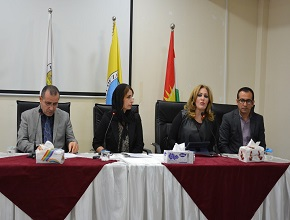 On Sunday, the 23rd of October, 2016, the presidency of the department of Kurdish Language organized a signing ceremony for the Kurdish poet Jagar Khwin for his book of poems under the title" Khwa Shakhwani" and which was read by the Kurdish writer and journalist, Mr. Darbaz Mustafa. The event was arranged by Mrs. Shilan Younis, lecturer at the department of Kurdish language at UOZ. Furthermore, this book was published by Dar AL-Nad house for printing and publishing. In the end, the book was sign by the poet followed by some constructive discussions between him and the audiences.