The University of Zakho Participated in the 45th anniversary of Founding The Kurds' Writers Union. 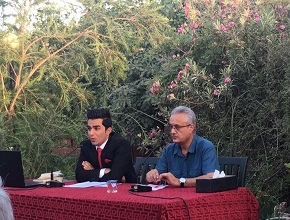 On Thursday, the 11th of August, 2016. The 45 anniversary of founding the Union of Kurds' writers was commemorated in the presence of the union's president, Mr. Hassan Slivany, along with kurd writers and important people of the governorate of Duhok. In this occasion, a seminar was held under the title" a critical and analytical study of the novel 'Nakhin Darazi' for the Kurdish writer Omed Sagvan." And was presented by Mr.Dlir Kamal, an Assist. Researcher at the University of Zakho, At 6:00 p.m at the garden of the union. Worth mentioning, Mr.Dlir Kamal made an accurate description and explanation regarding this novel and talked about some of the important points about it. At the end, a constructive discussion was made between the presenter and the audience.