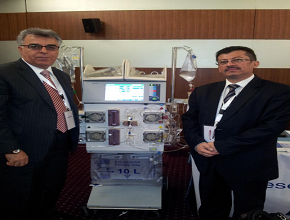 The University of Zakho participated in the Implantation of Sutureless Aortic Valve Workshop represented by Dr. Ahmad H. Ibrahim, Department of Biological Sciences, attended workshop on the 6 th April 2016, which was held at Le Royal Hotel, Amman, Jordan. The event was held under the patronage of Jordanian Association of Cardiac Surgeons supported by Fakhoury Medical Supplies F.M.S and LivaNova Health innovation.

This workshpop was orgainzed by Sorin Group, and the operation was conducted by Gorges Daccache (Italy) and Dr. Christos G. Alexious (Greece). The workshop was designed to provide the latest scientific knowledge in the field of cardiac surgery using the implantation of sutureless Aortic valve technique. The surgery was conducted using open heart operation to replace the heart valves by parachuted technic to be removed completely at the end of process and leaving the steam cells to grow directly on the artificial valves.

This method considered as one of the most developed promising techniques. The workshop also includes few lectures which are as follows:

At the end of discussion, the participants pointed out the importance of attending such workshop that provides the opportunity to exchange experiences in order to serve the medical profession and humanity in general.